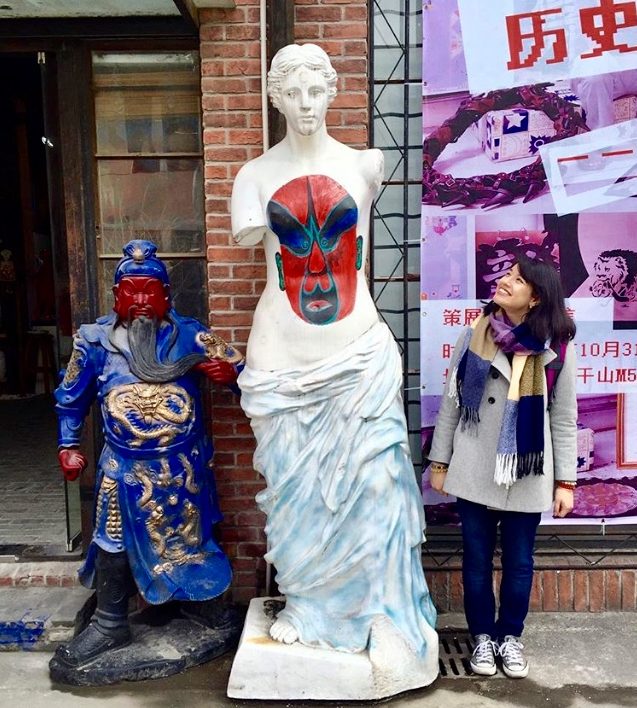 I had been living in Shanghai for almost a year when I met a Chinese-American acquaintance for dinner. We had met once before, in New York, where we attended separate colleges but met through a mutual friend. Now, we both had jobs on the other side of the planet.

She asked me how I was doing, and if I missed the United States. Candidly, I told her I felt more at ease in China for a couple reasons; street harassment was not a problem and the racism I had encountered in college still stung. I stumbled through those four years on a campus I found claustrophobic and conservative, drowning in a depression that nearly swallowed me whole. In many ways, moving to Shanghai was an escape. Or an exercise in self-exile.

“But you don’t even look Asian,” she said flatly. “When I look at you, you just look white.”

That is the curse of being biracial. My face is its own Rorschach test—a kaleidoscope that morphs depending on who sees me and where. At first glance, there is typically no middle ground. I can only be one or the other—Chinese or white—but never both at the same time. I tried to keep my expression neutral as my mind reeled through racist childhood incidents as if clicking through a View-Finder. I remember being called a “dog-eater” and a “chink.” I remember being too young to understand politics, but old enough to take note of how baby boomers spat the term “communism’” like a curse word when I answered questions about my heritage. But I didn’t say any of this aloud. I only shrugged and said: “Maybe I do, maybe I don’t.

In America, especially in places that lack racial diversity, I am seen first and foremost as Asian. In Asia, I’m a white foreigner. I’m addressed in English and seen as American—which meant being associated with all the unsavory stereotypes Americans are confronted with abroad. Wherever I am in the world, the parts of me that fall into the minority always contrast the most and set me apart.

My parents met in the late ‘80s, amid China’s “reform and opening up” period. A native Beijinger, Mom excelled at English and was placed to work at the newly opened Lido Hotel, which received an influx of businessmen from all over the world eager to satisfy a nation’s hunger for foreign investment. My dad was one of those businessmen and he managed a joint-venture right by the Gǔlóu district. Born and raised in Massachusetts, he is of Italian, Irish, and French descent (but mostly Italian, he’ll have you know).

After moving back and forth between China and the US, my parents settled down in a Floridian suburb, where I began school and my younger sister Mandy was born. From first to fifth grade, only one other student in my class was Asian, so being Chinese became a defining characteristic for me. Teachers called my eyes exotic, and kids asked if I ate monkey guts or dog meat. At home, Mom folded dumplings and snacked on pigs’ feet while Dad grilled steak and munched on Cheetos. For every person in Florida who thought my dad adopted me, there was another in China who assumed my mom was my nanny or tutor when she was out with just me and Mandy.

When we visited family in Beijing during summer breaks, I knew to politely refuse a gift from my aunts until it was shoved into my arms, drink hot water without complaint, and carefully pick out the bones in steamed fish with chopsticks like my cousins. I was scolded when I didn’t speak Mandarin, and I was scolded when I tried to string a sentence together. “You sound awful,” everyone said. I avoided speaking the language until college, where I tried to make up for lost time.

For most of my life, I considered myself Asian-American, because the world I lived in saw me as such. While studying at a diverse magnet high school, I commiserated with fellow kids of immigrants who rebelled against the model-minority myth in our own ways: secretly dating, smoking, partying, or choosing a non-STEM related field to study. At 18, I earned a sizeable scholarship to attend a Catholic liberal arts college, where I stuck out like a sore thumb among my prep-school classmates from Westchester and Connecticut. Common refrains I heard my freshman year include: “I’ve never had an Asian friend” and “I’ve never even met a half-Asian before!” After four years of feeling like a freakish specimen under a microscope, my only wish was to run away—not to Beijing, where I spent numerous childhood summers, but to Shanghai. There, I could have a fresh start in a new city where no one knew my name.

Yet when I began my new job, I was unprepared for the racial whiplash I experienced. Comments like: “You’re just half” and “But you’re just American,” wore me down. In a staff meeting one day, I talked about attending a retreat in college just for students of color. Both my Western and Chinese colleagues didn’t believe that I could be considered a person of color. “What do you mean…students of ‘color’? Aren’t you white?” They asked, incredulous.

With a European last name, native English-speaking abilities and white-passing facial features, I am shielded from a good degree of prejudice. But after working in Shanghai for over three years, I learned that I could be privileged but still feel alienated. Most expats I met gagged at the sight of the snacks I loved eating as a kid: black sesame and red bean desserts, milk tea, moon cakes and black-stained century eggs. When entire conversations revolved around how “all” Chinese people spat on the ground, peed in the streets, and were “rude” or at worst, “uncivilized,” I was livid. A squat toilet, a steaming cup of hot water, a terse waitress or an auntie who shoved her way onto the subway did not faze me.

In expat circles, I learned that few cared about the memories that informed my cultural understanding. Many only focused on how “wrong” everything seemed in their eyes. I despised this attitude of “right” versus “wrong”: a dichotomy usually accompanied by a sense of imagined superiority. On the other hand, my Chinese upbringing didn’t save me from being called an “inauthentic” Chinese, half-Chinese, or all-American banana (white on the inside, yellow on the outside). For a few years, the US didn’t feel like home and neither did Shanghai. Looking back, I realize what I had been searching for was acceptance. I was looking for people who would see me the way I see myself, instead of categorizing and labelling me as they see fit.

Luckily, I did find acceptance in some of the loneliest corners of the city. I found it in interactions with migrant workers at mom-and-pop stores. They were eager to talk about their hometowns and gently corrected my grammar. I found it in friendly shopkeepers and taxi drivers who would call me “Hùnxuè’ér” or “mixed race” in Mandarin, smiling and asking me how my parents met. I found it in friends who welcomed my food recommendations, impromptu invitations to eat midnight hot pot and all-night KTV marathons where it didn’t matter whether I sang in Chinese or English. These interactions taught me that true belonging can be found in friendships where I didn’t feel forced to choose between being “just” American or Chinese.

Many people around the world still tend to think in mutually exclusive terms when it comes to race. Many do not see nationality as separate from ethnicity. But the world is changing. One in 30 people now live outside their country of birth—an all-time high according to a 2018 study. The United Kingdom’s mixed-race population is currently the nation’s fastest growing racial group. According to a Pew Center report from 2017, the number of interracial marriages in the US grew by more than double between 1980 and 2015.

My hope is that more and more biracial and mixed-race individuals will share their multifaceted stories and help society understand that we cannot be labeled simply by first impressions, our birthplaces, or our language abilities. Our identity is not up for debate or scrutiny.

Now, I try not to think of myself in fractions—half as opposed to whole, half as opposed to never enough—but as the sum of all that I am. And while I used to feel lost between the homes I’ve accumulated—Florida, New York, Beijing, and Shanghai—I’ve begun to see how lucky I am. After all, when you have people who care about you in multiple time zones, it means there is always someone awake in this world you can call.

Jessie Lau is a writer from Hong Kong analyzing identity, human rights and politics. Her writing has been published by The Economist, The Diplomat Magazine and Quartz, among others. She serves as Board Member and Online Editor-in-Chief at NüVoices, a collective supporting women working on China subjects. Formerly a Hong Kong and China reporter with the South China Morning Post, she holds a MSc from the London School of Economics, an LLM from Peking University and a BA from the University of California, Berkeley. Website: www.laujessie.com. Twitter: @_laujessie